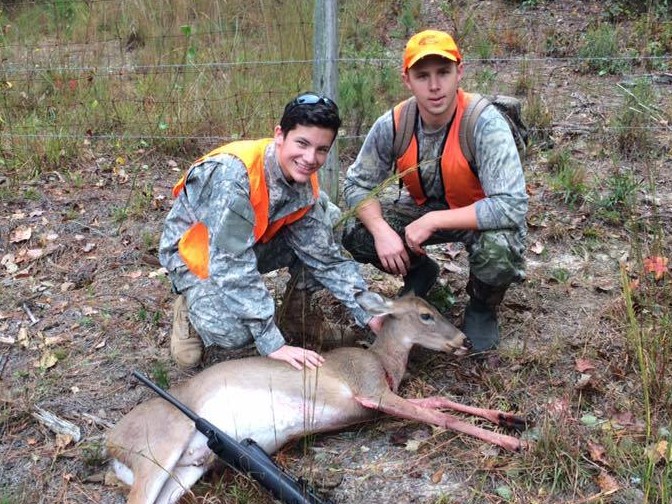 Our Georgia Chapter had a blast at our first Deer Hunt of the season this past weekend.  It was truly a great time in God’s Creation spending time bonding between these young men and mentors.  As always we split our large group into smaller groups for the deer hunts.  This allows us to be more intentional with these boys during this time in the fall.  Friday night we enjoyed a feast for dinner, as Leslie Brooks prepared and her and Carrie Davis served a roast and all the fixings.  After dinner we had some deer hunting talk, reviewed our gun safety, and went over assignments and stand locations for the next day.  Soon after we settled in to hear a devotion by mentor Alix.   Afterwards the boys had some fun as always with a game of Man Hunt.  Saturday morning came early, as we headed to Walker Creek Outdoors in Waco, GA to get settled in the deer stands before sunrise.   After about an hour or so in the stands the deer movement really started picking up.  Everyone began receiving texts from different groups with deer sightings, but no clean shot.  Soon though we heard a shot come from the Creek Bottom stand and Aaron had gotten his very first deer, teamed with mentor Michael Forlaw.  It was high fives and congrats all around for this young man as he was all smiles.  He was the only one to get a deer for the morning hunt, but plenty deer movement was seen.  We were treated again to Cowboy Tom and his wife Senga lunch of dutch oven chili and cornbread.  We had some downtime and then we headed back to the woods for the afternoon.  Everyone had not even gotten settled into the stands before another shot was heard.  This came from Jacob  and he too had taken his very first deer, and he was partnered with Georgia Program Director Don Brooks.  He was pumped and so was Don!  It was more smiles, congrats, and celebration for this young man.

Shannon Morgan and staff  do a great job with the property and we thank them for the use of it to show the boys the appreciation of God’s Creation!  Many deer were sighted this weekend and stronger bonds built.  As mentioned, this was a unique event in that there was a smaller group of boys, each matched with a specific mentor for the hunt.  It is our prayer that this type of more intentional, one on one time would produce stronger relationships and trust, as the boys and mentors get to know each other more deeply. And, that in doing so, we would see these boys come to know Christ as their Savior and to know Him more intimately in their walk during their middle and high school years.

You can see all the pictures by clicking the link below: