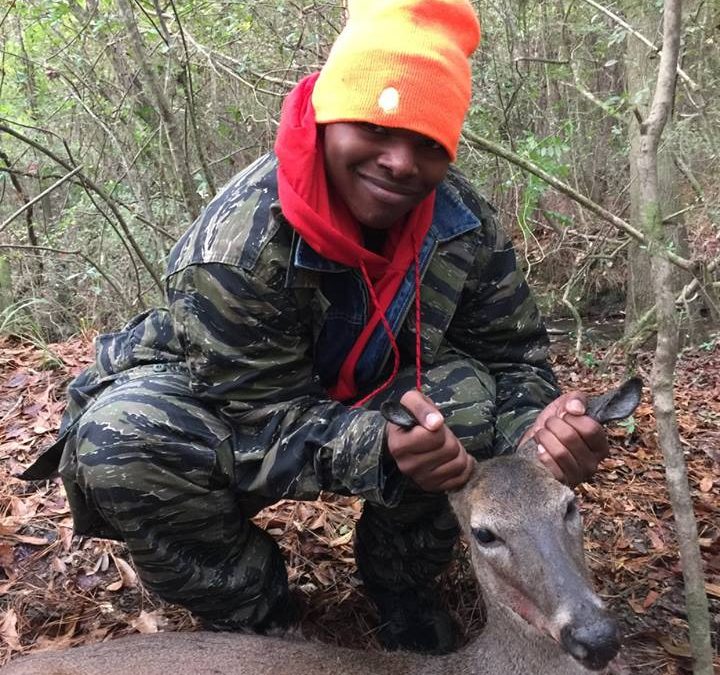 This past weekend out Louisiana Chapter held its November Deer Hunt for single parent boys.  What a great weekend it was!  We kicked things off Friday night with some chicken and sausage jambalaya for dinner.  Afterwards we reviewed some hunting and gun safety rules, and got all the gear handed out.  Then it was a game of hide & seek in the dark.  We hit the bed shortly after to get some rest for the big day in the deer woods. Saturday morning we got an early start as we grabbed a quick breakfast and headed to the deer woods.  It didn’t take long for the deer to start to move.  Less than an hour after daybreak, Victor Pounds and Program Director Micheal Rivers, had a buck come in, and Victor was able to drop the buck in his tracks! It was a nice four point. That makes two deer that Victor has harvested through our programs. After that, word quickly came in that Dominique Lewis, who was hunting with mentor Willie Alford, had taken a nice doe.   It was Dominique’s very first deer he had ever taken!  Dominique has been faithful in coming to the programs for several years now and has never had the opportunity to harvest a deer.  This is also his Sr year and last year to hunt with us so this was a big deal for us all and we were super excited for him.  Lucas Laborde and mentor Jewel Rivers saw 1 doe on the morning hunt but they never had good a shot.   After the morning movement slowed down, we all gathered back at the camp to take care of the game that was harvested and hear all the stories from the morning hunt.   After all the hard hunting and skinning everyone was ready for some lunch.   Mandy Rivers was with us for lunch and had prepared some delicious homemade chili.  After we were full, mentor Scot Martin brought a word for us.  We learned “what makes a dad”.   It was a great word and really showed the boys what God expects from them as a dad, when that time comes.   It was great for us as mentors to hear also, as we try to model what the father son relationship looks like through our programs.   After our time in God’s word, the boys opted for a nap instead of

fishing.  It wasn’t long and we were ready to hit the woods again.   The afternoon  hunt was a little slower, but Kameron Townsend was hunting with mentor Ronnie Alpha and was able to connect on a nice doe.  John Glover and mentor Christopher Blanton saw a nice doe but she never gave them a good shot.  It was a great program and relationships where built and strengthened.

The deer hunts offer a special time where the boys have more time specifically with a mentor in the deer stand for these relationships to be strengthened and built.  God really made His presence known and spoke to us through His word.   Please join us as we pray for these young men as they grow in their walk with the Lord and for the mentors as they try to model a father son relationship though our programs.

You can check out all the pictures by using the link below.