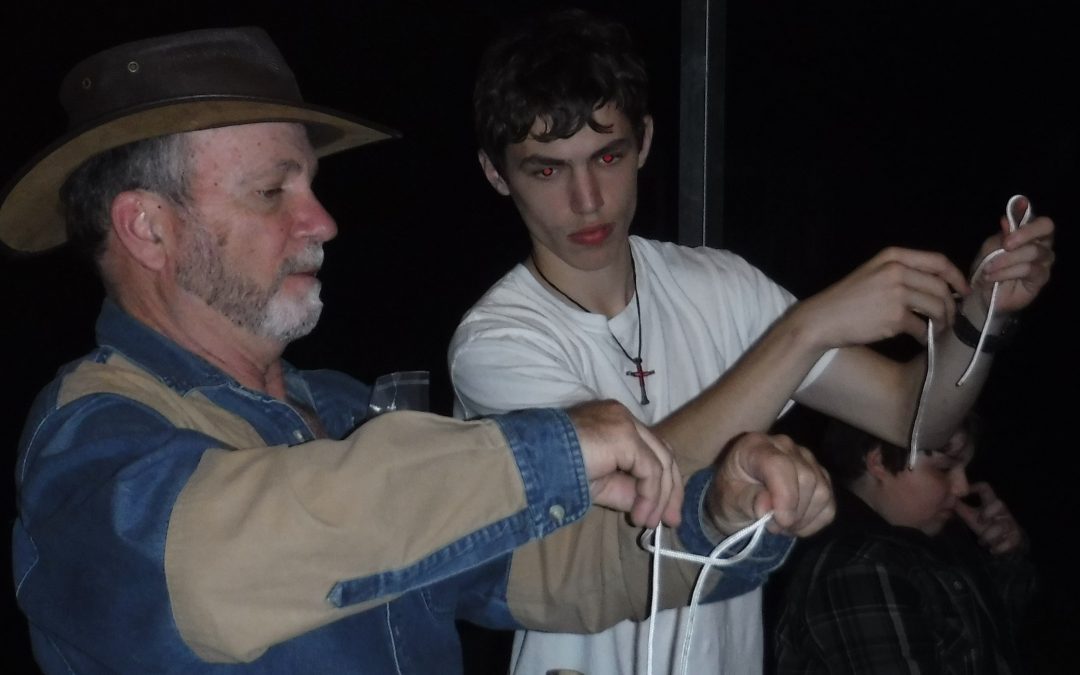 This past weekend our Louisiana Chapter held their first ever Pioneer Day Program. They welcomed Georgia Mentor Cowboy Tom Veale as he led the program and the pioneer skills for the boys. Mandy and Taylor Rivers prepared and served a great meatball pasta dish Friday night as we welcomed the boys and mentors to camp for the weekend. Program Director Michael Rivers welcomed CJ Wilson to his first program and then Dominique got up and told the group about his bonus trip that he earned and how much fun that was. After announcements Tom Veale began with some knot tying instructional. The boys learned two basic knots and how to tie them to their spars. They boys really picked up on the knot tying. In addition they learned some basic knowledge around a camp buddy and what it was used for as well as the purpose of a dakota fire pit. Tom concluded his time with a devotional challenging the boys to find their purpose and plan God has for their life. After we concluded we joined around the fire, boys and mentors, for a little man time before hitting the bed for the night. Saturday we got started to a great country breakfast served and prepared by Mandy Rivers, Taylor Rivers, and Carrie Davis. After breakfast Cowboy Tom reviewed all that we did Friday night and then the teams began to build their camp buddies. As the morning went on it was apparent

the boys were thinking outside the box and adding additional elements they felt would help and improve their specific camp buddies. This showed teamwork and initiative. Also certain members of each team were responsible for digging their dakota fire pits. These were done with care and attention to detail. All camp buddies and dakota fire pits turned out great. Then it was time for Cowboy Tom and Carrie Davis to judge and decide who won. It was close competition but ultimately the team of Joseph, CJ, and Troy was the winning team. We got cleaned up and had a great BBQ Chicken lunch prepared by Mentor Winston Taylor.  Shortly after Mentor Micheal Thomas led a devotional to challenge us in our walk with God.  Before leaving for the day Program Director Michael Rivers recognized Dominique Lewis as this would be his last program before graduating high school and our programs. He presented Dominique with a picture frame capturing all the highlights and moments from Dominique’s 3+ years with us. We are truly proud of this young man and wish him well as he goes on to college as a Christian young man and we look forward to seeing where God will lead him.

This was another great program in God’s Creation spending time mentoring and ministering to these young men being raised in a single parent home. We ask for your continued prayers over these programs, mentors, and boys as we reach, inspire, support, and engage them during our time together.

You can check out all the pictures using this link below.